HMS Gawain in the novels

Pearls of Wisdom Weber about the Roland class 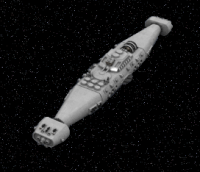 A Chanson-class destroyer. This is an older and much smaller Manticoran destroyer class.